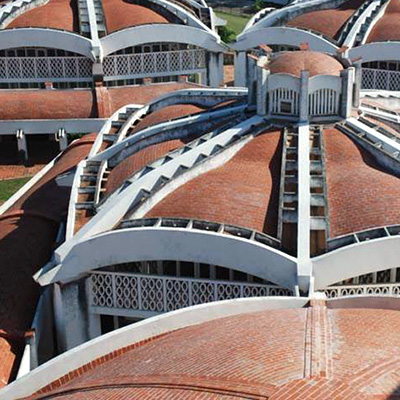 “Cuba will count as having the most beautiful academy of arts in the world”
Fidel Castro 1961.

“Cuba will count as having the most beautiful academy of arts in the world” Fidel Castro 1961.

Cubanacán: School of Dance The Schools were allowed to decay when pre-cast concrete panels became the Soviet inspired rule. The group as a whole is considered by World Monuments Fund to be amongst the World’s 150 most significant buildings. Arch Ricardo Porro 1961 repaired by the Ministry circa 2010.

Theatre School: Site of the auditorium looking towards the outdoor studio theatre

Cubanacán: School of Ballet Extraordinary series of organic spaces. Abandoned when 95% complete it was then used as a circus school. Proposal for restoration led by Carlos Acosta, a Cuban Principal dancer and choreographer of the Royal Ballet in London. Arch Vittorio Garatti 1961, abandoned ruin.

Cubanacán: School of Music A 320m long corridor connecting a series of teaching spaces. The roof was destroyed by a Hurricane and the building abandoned. Music students practice in the ruins. Arch. Vittorio Garrati 1961 . Abandoned ruin.