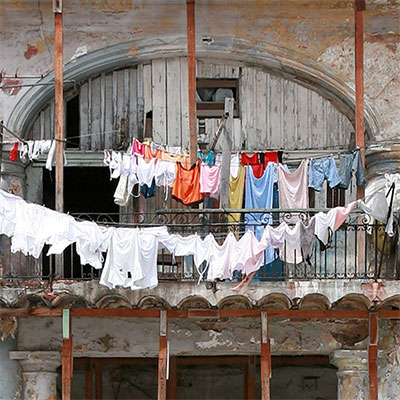 The OHCH was established in 1938 as an autonomous Public Institution charged with the conservation of the city’s major public buildings. Following the collapse of the Soviet Union in the 1990’s; the Cuban “Special Period in the time of peace”, funding for the work of the OHCH was diverted to more urgent priorities, such as food. Not content to see the city collapse, the second city historian Eusabio Leal Spengler created an initiative which led to the passing of law to allow the OHCH to setting up a commercial arm, Habaguanex, through which OHCH could earn hard currency to be invested in the restoration of the historical centre. Income from the area’s economic and tourist activity has been used to restore a wide range of buildings and to begin to transform the central area.

It is normal for residential Buildings throughout Cuba to be are overcrowded. The state of some of the buildings is so bad that the buildings collapse, regularly killing some of the residents who have no system of early warning of imminent collapse. and any project may require a long preparatory period where residents agree with the OHCH who is to stay in the restored building and who will move to other property.